Mini polar expeditions above the Arctic Circle in Northern Norway

After skiing across Greenland in 2012, one part of me thought I would never again return to a polar environment. The mind-numbing monotony of skiing for hours on end, day after day into empty white nothingness. The constant, unrelenting struggle of dragging a sled weighing more than I did. The intense brutality of a ferocious, inhospitable environment unwelcoming to the presence of us humans. It was all just a bit too much.

Yet, little did I know at the time, those elements, which I once believed were too heavy a cross to bear, they would become the very same ingredients of my salvation. After transcending PTSD, depression and alcoholism that drove me to the brink of suicide, something inside of me sought to return to the solitude, stillness and pure, unforgiving suffering of polar exploration.

After having run a countless number of ultramarathons, served in a war zone with the US Marines, climbed mountains in the Himalayas, jumped out of planes, explored underwater caves and tested myself in almost every environment the planet has to offer, I have come to discover that polar exploration is by far the greatest form of self-inflicted, yet noble suffering one could choose to experience.

Legendary polar explorer Apsley Cherry-Garrard, the author of The Worst Journey in The World, described this perfectly…

“Polar exploration is at once the cleanest and most isolated way of having a bad time which has been devised.”

The monotony necessitates a stillness of mind. The suffering requires a mastery of spirit. The endless hours of toil strain the body to its limits. The cold demands perfection. For out there, in one of the most hostile environments on the planet, the smallest of mistakes lead to the most dire of consequences.

It truly is a transcendent experience that brings us closer to our own divinity, awakening the inner Buddhahood that lives within us all.

With the birth of Fearvana, those seeds of noble suffering which laid dormant inside of me during my battles with my demons awakened once more…

My most recent mini polar expedition was a 5 day journey in Finnmark, a region north of the Arctic Circle in Norway. While beautiful in its own right, I choose Finnmark as a battle ground to train for a series of much bigger polar expeditions I have planned over the next few years. My plans include expeditions to the North and South Poles, and a never-before-accomplished polar expedition that will push me to the very edge of human endurance.

Here is the GPS data of the route we took on the Finnmarksvidda Plateau. 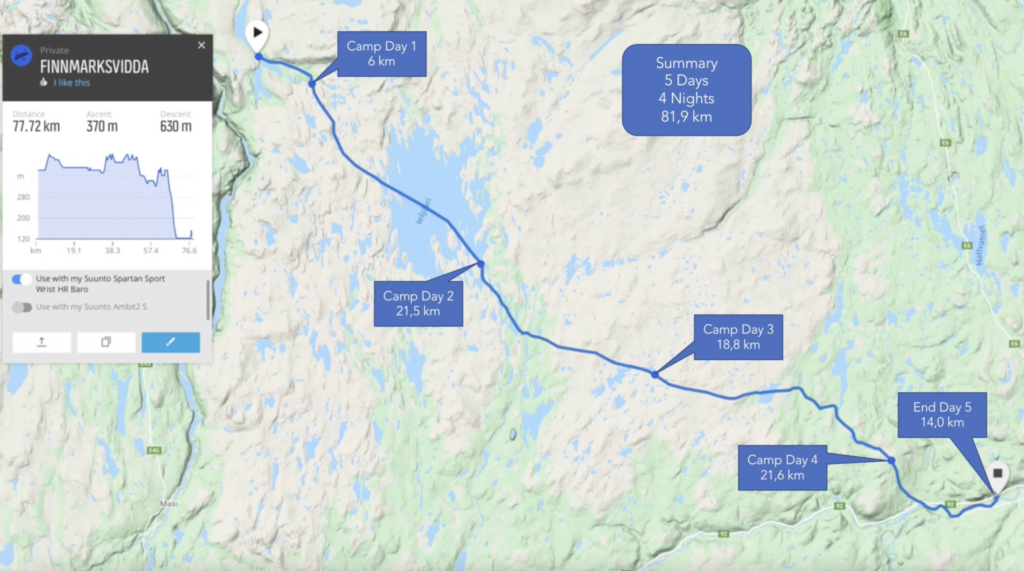